Okay, so I’m really starting to drift away from, what once, was a concept forming inside my little head.I hereby declare all weekdays, sundays! (except for friday & saturday…)
Been in the studio all day digging through Benny’s latest vinyl findings.
Found a few goodies in there actually.
Also messed around with double lights.
Sure wish there was an easier way to bypass the dreaded lock-up problem with the Canon 550EX Speedlight.
Anywho…
Following photos were taken with 550EX shot through umbrella at somewhere around, I’d say, 1/8th of it’s full capacity. Flash was placed at back camera right.Also used an old Olympus T18 with no manual settings whatsoever. I took this little thing and placed it on my old tripod, aimed it roughly around 90 degrees angle with the speedlight. This making sort of a triangular shape towards the mixingdesk. Triggered the Olympus with a simple optical slave trigger that set me back around $4-5 USD (plus customs little “import fee”). Thought they came out cool. Did some post-work in PS with the colours.
Also, I would like to take the opportunity to say that critique under constructive forms are more than welcome. I will not give you the finger just because you’ve said in my blog that my photo’s suck so you need not to worry though!
After all I’m taking these pictures because of the simple fact that I like them personally. 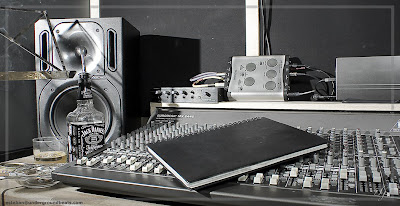